What I learned from running multivariant tests on my funnel 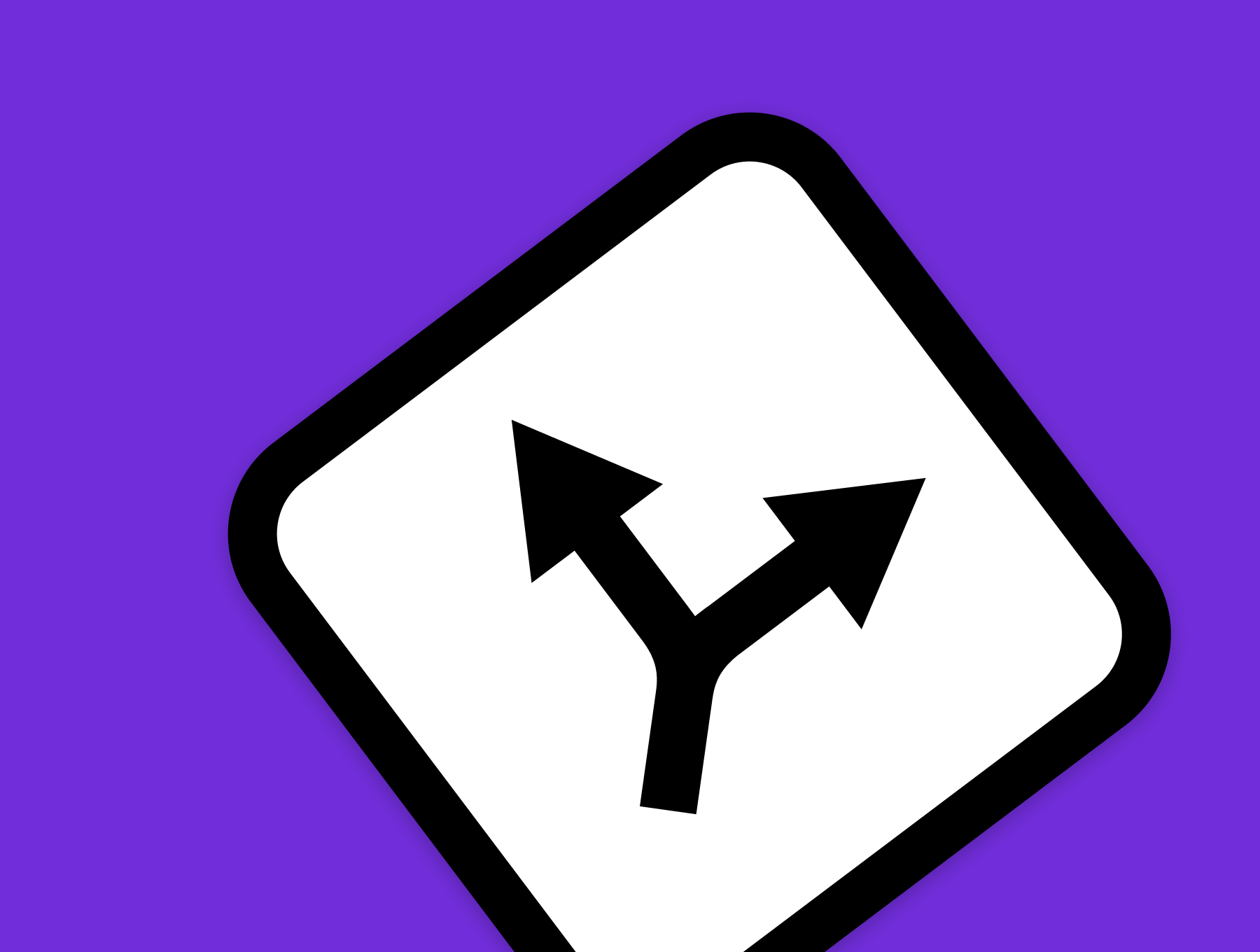 When building the first version of Vitaely, I didn’t put too much thought into the landing page and sign up funnel, other than it needing to roughly communicate the purpose of the product and actually allow someone to sign up.

I took a fairly traditional approach:

Once I set it up, I more or less ignored it and instead tried to focus on either improvements to the profile or on trying to get people to the website in the first place.

Comparing data in google analytics (reflecting topline traffic) and firebase (reflecting sign ups), it was clear that there was a drop-off between the two. I had to know more about how users were moving, or not moving, through the funnel.

I find Google Analytics annoying to use, so I went in search of something easier and better. Enter; Mixpanel. I set up some simple tracking that would fire when a certain page is viewed or an event is fired.

This provided me with a view of progression at each step and I made some tweaks to the flow off the back of these steps; namely combining the email opt-in step into the sign up page, and adding more helpful information to the sync page.

Some minor improvements followed. But now I was hungry for more and longed for more significant experimentation on the journey.

The big idea I had was to flip the fundamental order of the sign up funnel; to move the Syncing of data from Linkedin right to the top of the funnel, view a preview of what their profile would like, and then allow them to sign up to save their progress.

This way users can see the value much sooner. My theory was that once users saw the value then they would be more likely to sign up. 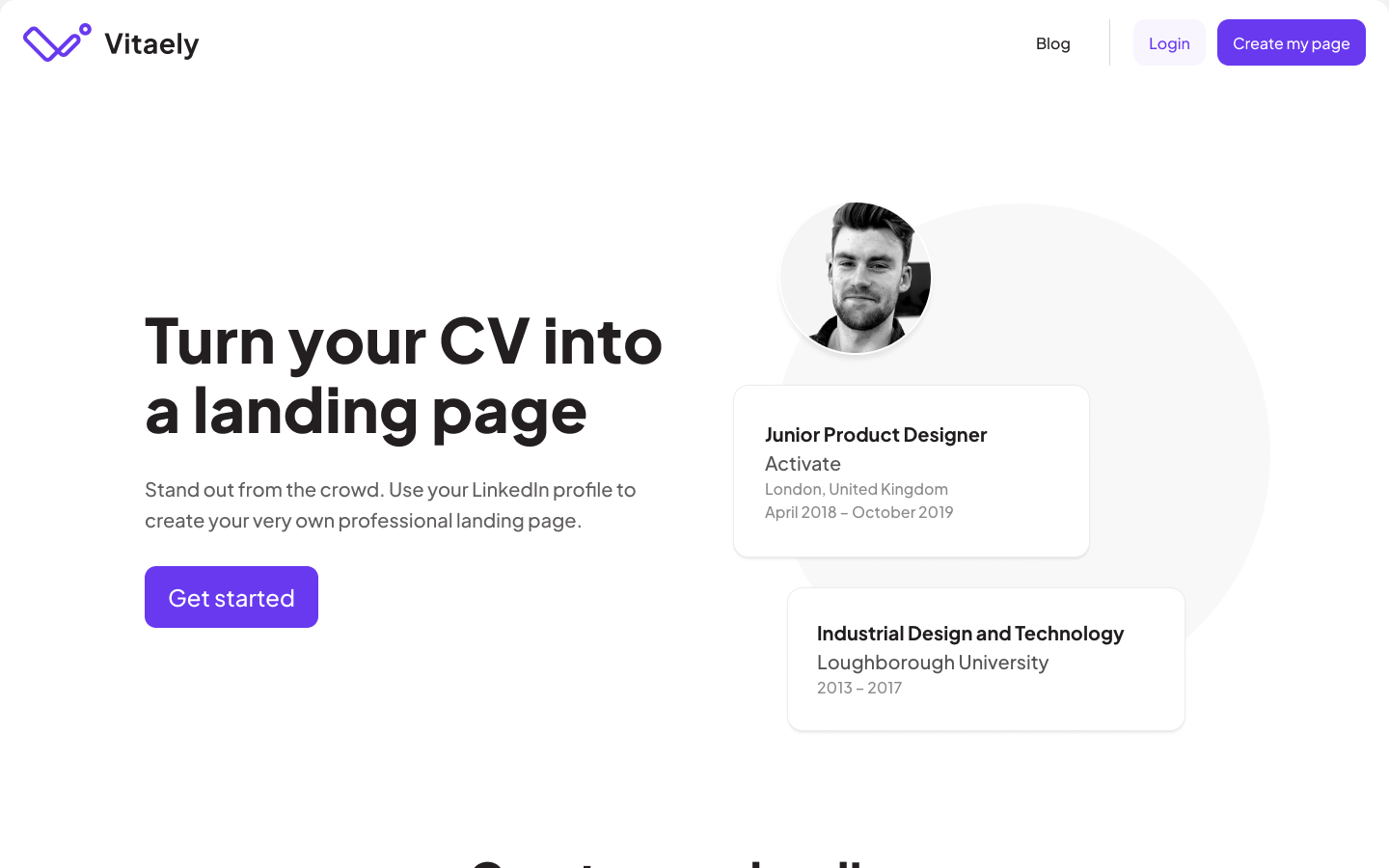 Variant A - The original landing page which has been more or less unchanged since Vitaely.me launched in April 2021. The funnel takes the user from Get started, Create account, Get information with Linkedin, and finally to the Profile 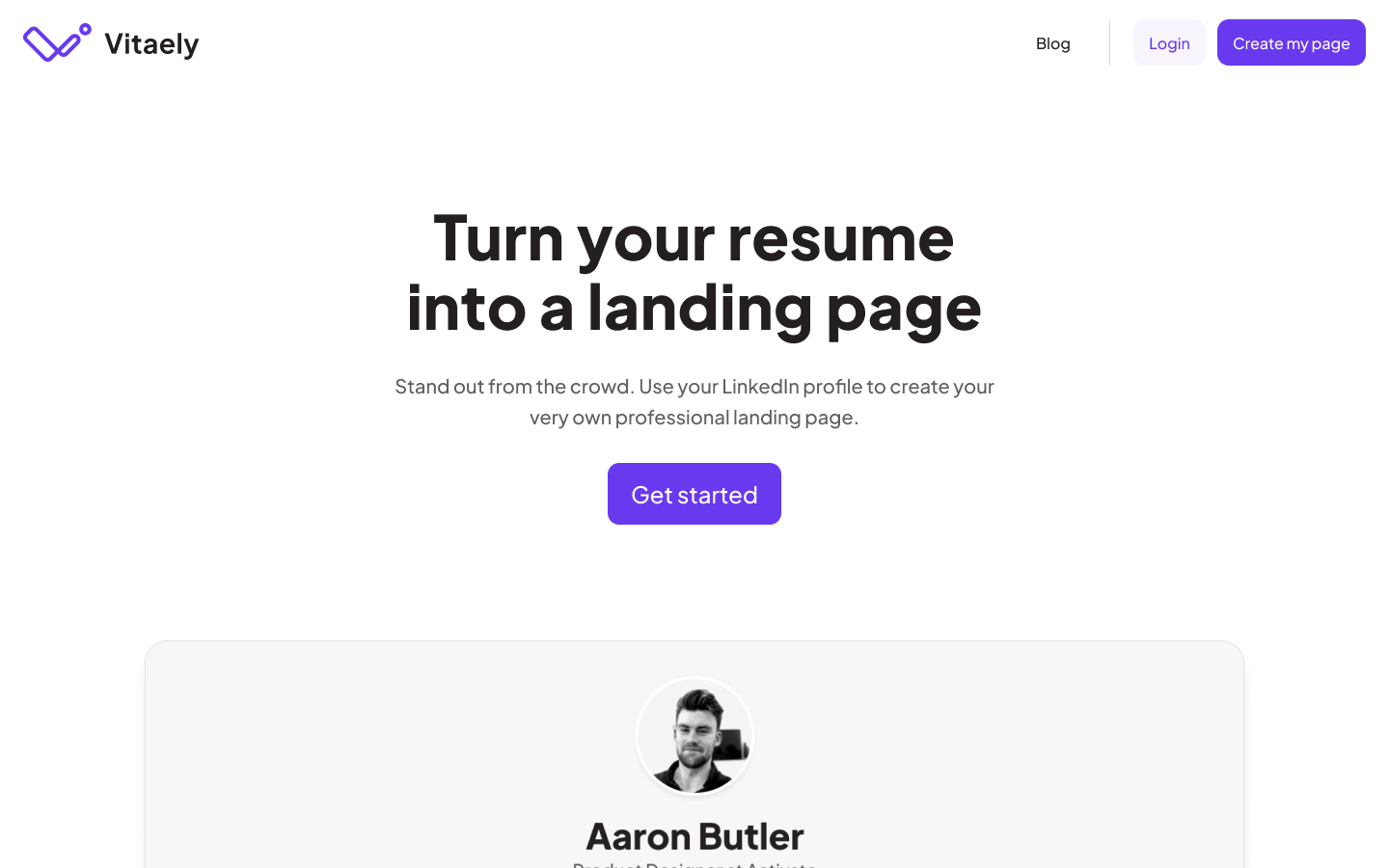 Variant B - Simplifying the hero section and moving the profile preview up the page so it just below sign up. The funnel is otherwise the same as the original. But this was really just so I could test against the next variant. 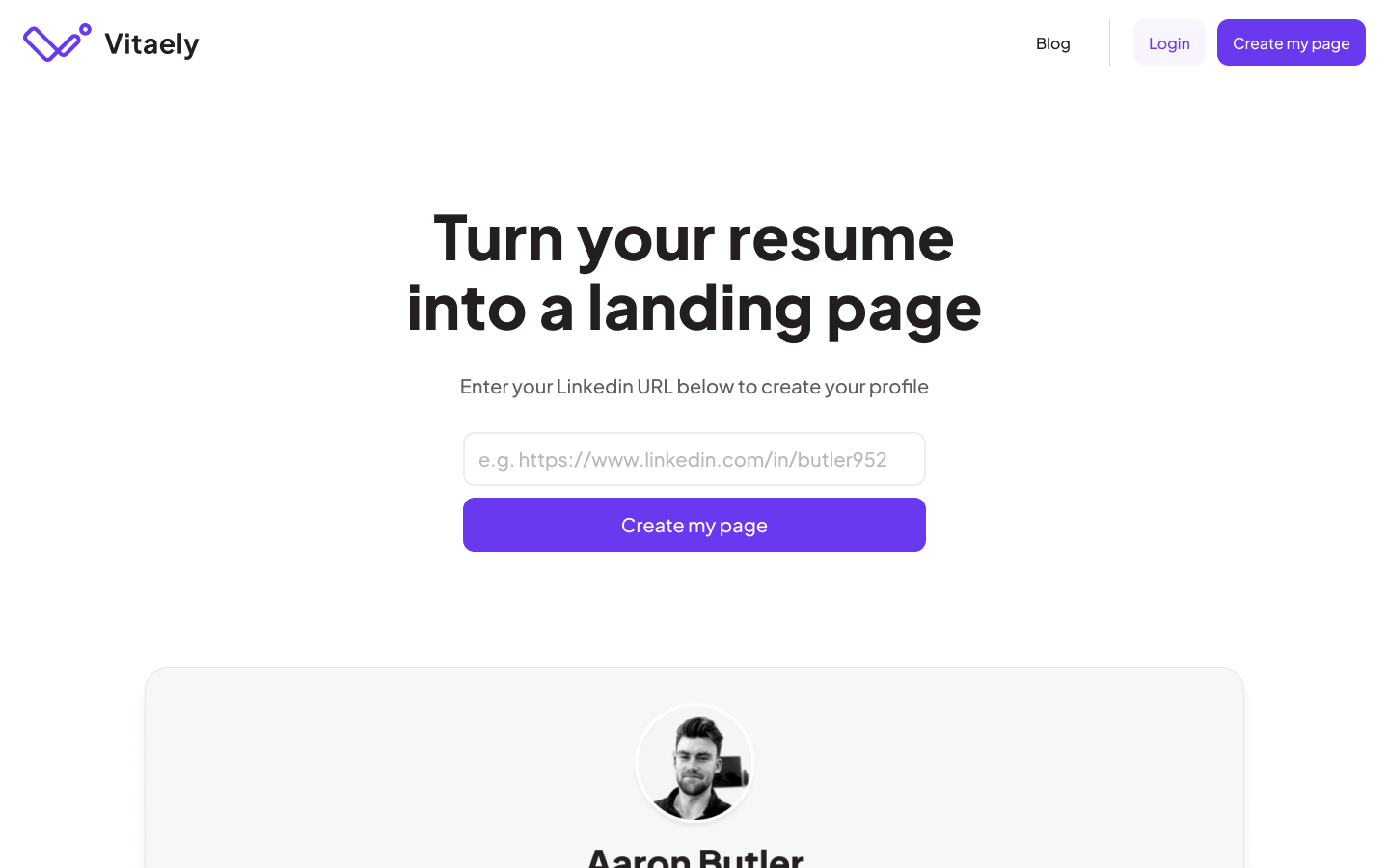 Variant C - The same modifications as Variant B but with the CTA replaced with the Linkedin URL field required to get the information from the user’s profile.

I don’t have massive volumes of traffic listing the site, so I left the experiment to run for around a month. The results were reasonably conclusive; but not exactly what I had expected. 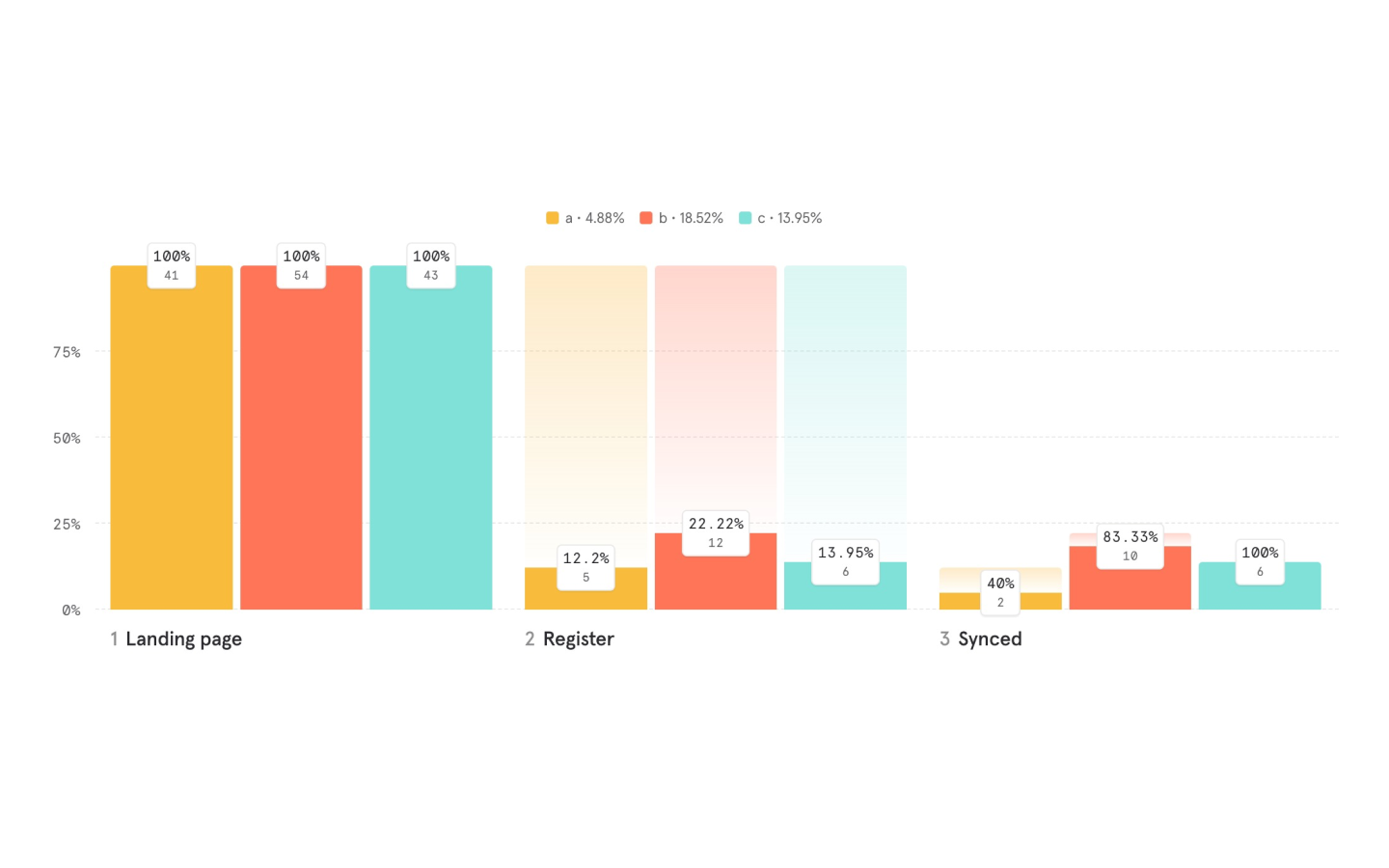 Here are the results for the conversion from viewing the landing page to syncing their Linkedin profile with a created account.

One thing to note about Variant C; due to the data from Linkedin being collected before registering, the Register and Sync events fire at the same time, at which point the users data is actually saved to their profile. This explains the 0% drop from register to sync for Variant C.

To my surprise, the winning variant was Variant B; no funnel updates, only landing page layout changes.

Variant A, i.e. the original landing page, came in a long way off in last place.

Despite the small-ish sample size, I think this experiment has safely established that the original variant is inferior to the other two.

However, the other two came close enough that I’d like to continue to run the experiment for a while with Variants B and C.

Regardless of which one wins from here on out, conversion from landing page to profile is around three times higher compared to the original!

Back to the lab!